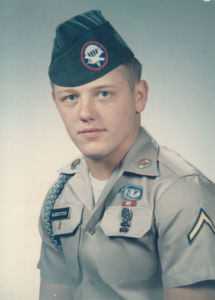 Anthony (Tony) Markevitch, Jr, was born in Sheboygan, Wisconsin on October 4, 1948. The firstborn son of Anthony and Sylvia Markevitch, Tony was eventually joined by James, Georgene, and Steven. In 1962, the family relocated to Onalaska, Wisconsin. Tony was a high spirited young man who enjoyed playing football and was a conference-champion wrestler in high school.

Tony was well liked by the other members of the 1st Infantry Division during his almost year-long deployment in Vietnam. He was being phased out of combat and volunteered to undertake the mission that ultimately took his life on April 16, 1969.

He was awarded three Bronze Stars, two with oak leaf clusters and “V” for valor. He was described as a true warrior in a book entitled War Paint written by Bill Goshen, who served with Tony.