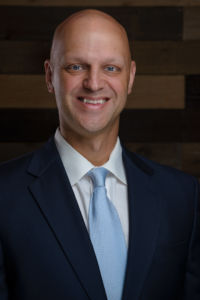 Erik Beguin is a nationally recognized banking and financial services entrepreneur and consumer advocate. Erik graduated first in his class from Onalaska High School in 1989 and was inducted into the National Honor Society. He was class president, a member of the inaugural varsity soccer team, and participated in band, tennis, cross country, concert and show choir.

Erik has founded multiple businesses in banking, home mortgage, and consumer financial services. The common theme in all his business ventures is ‘doing well by doing good’. He founded Austin Capital Bank in 2006 to serve the needs of working-class families. In 2018 he founded Credit Strong to help millions of Americans with low credit scores build their credit profile to break the vicious cycle of high cost personal debt. Under Mr. Beguin’s leadership Austin Capital Bank has been recognized as one of the best performing and fastest growing banks in the nation.

Beguin is an active member of his community having served on the Board of Directors for the American Red Cross of Central Texas, and volunteering for a wide array of community service organizations including; Foundation Communities volunteer income tax assistance program, El Buen Samaritano English as a second language teacher, Sunshine Camps for underprivileged youth, Habitat for Humanity, and Junior Achievement.

In recognition of his contributions to banking and consumers, Erik was appointed to both the Consumer Financial Protection Bureau Community Bank Advisory Council and the Federal Reserve Bank of Dallas Community Depository Institution Advisory Council. He received the Austin Under 40 Award for Financial Services in 2007.

Erik is the son of Nancy and Everett Beguin and has one brother Allen who is a 1987 graduate of Onalaska High School. He is married to Kimberley and has three children, Zane, Blaise and his step-son Billy.