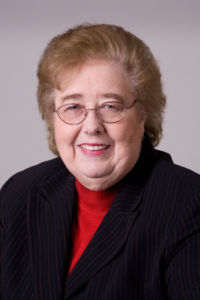 Florence Hyatt has been a member of the School District of Onalaska since she started as an elementary teacher in January of 1964. She taught 5th and 6th grades at Irving Pertzch, developed the first elementary library at Northern Hills and transferred to the Onalaska Middle School LMC in 1976 where she remained until her retirement in 2001. Florence was a long-term substitute teacher during the 2001-2002 school year and was then elected to the Board of Education in 2002. In these various roles, she has served the School District of Onalaska for the past 49 years. Florence has also contributed in numerous leadership roles with the National Education Association, Coulee Region United Educators, Wisconsin Association of School Boards, Kohl Scholarship Selection Committee, Onalaska Education Association and many more organizations and initiatives related to education.

Florence Hyatt is one of the most familiar faces Onalaska High School Students recognize at events. She attends nearly every student event, including athletic events, concerts, drama productions, award ceremonies and student fundraisers. She wears her Purple Onalaska apparel with pride and can be counted on to support all OHS students in every part of student academic and co-curricular life. Florence is always positive in her support of OHS and thoroughly enjoys watching OHS students achieve their goals.