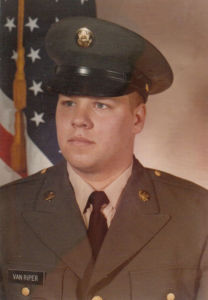 SP5 Kenneth D. Van Riper, Jr., “Rusty,” son of Kenneth and Carol Van Riper, graduated from Onalaska High School in 1971. During his years at OHS, he played football and basketball, participated in choir and show choir, played the cornet in the OHS band, and especially enjoyed playing Taps at Memorial Day Ceremonies.

Rusty enlisted in the Army in 1975 and was stationed at Fort Leonard Wood, Missouri, for basic training; from there he was stationed at Fort Sill, Oklahoma, for Advanced Individual Training and graduated as one of the tops in his class. Rusty was assigned to the 2nd Battalion, 320th Field Air Assault of the 101st Airborne Division at Fort Campbell, Kentucky. On September 18, 1978, while on training maneuvers, Specialist Van Riper was a passenger in a Gamma Goat which, when forced to make a sharp turn, rolled down a hill and caused him to suffer internal injuries.

He died September 18, 1978, less than three months before his expected honorable discharge and eleven days before his wife, (Bonnie) gave birth to their son, Matthew. Specialist Van Riper was awarded the Meritorious Medal posthumously.