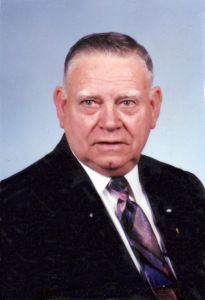 LeRoy Hougom has been affectionately referred to as “Mr. Onalaska” for the past 60 years because of his tremendous support of Onalaska High School Activities and the Onalaska Community. LeRoy graduated from OHS in 1948 and then served in the United States Army before returning to Onalaska. LeRoy delivered milk door-to-door for over 30 years for Krause Dairy and later Borden’s Dairy. During that time, many families were the recipients of his generosity as he would often leave chocolate milk or orange juice as a treat for the kids in the house at his own expense. LeRoy later established Hilltopper Refuse and Recycling; the name of the company and the purple and white trucks exemplify his intense pride for his alma mater. LeRoy was a fixture at OHS activities for many years including spending over twenty years on the football chain crew, serving as the first president of the athletic booster club, and being a positive source of encouragement for countless athletes. Several former OHS athletes fondly remember LeRoy paying for their entire team to have dinner at an area restaurant at the end of the football, basketball, and baseball seasons. For many students, this was a rare treat and the dinners always ended with LeRoy sharing how proud he was of the way the team played that season and how good they would be the next year.