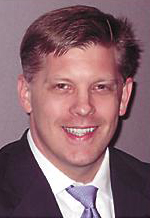 While at Onalaska High School, Mike was Senior Class President and Valedictorian, recipient of the Honor Medallion, and recognized as Athlete of the Year after earning twelve varsity letters. He was a WIAA Scholar Athlete and a Wisconsin Presidential Scholar. He graduated from the West Point Military Academy and was ranked second in his class. While at the Academy, he was named Deputy Brigade Commander, played Army football and received numerous academic, athletic, and military recognitions. Mike attended Oxford University in England where he received his Master of Arts Degree in Economics. He then fulfilled his responsibility to the United States Army as an Executive Officer and Lieutenant of Infantry. Today, he is a leader in the financial world and was recognized as the youngest bank president of American Securities in Japan. Since 2000, Mike has awarded six Academic Excellence Scholarships per year at Onalaska High School.