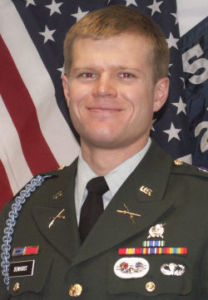 Nick Dewhirst, the son of Randy and Susan Dewhirst, graduated from Onalaska High School in 2001. Nick was on Student Council and was an Eagle Scout. While in high school, Nick decided to attend one of the nation’s service academies. After being accepted to the Naval Academy, he was medically disqualified due to an eyesight color deficiency. He applied to the United States Military Academy at West Point, but there was no opening. He accepted an ROTC scholarship at Embry-Riddle Aeronautical University in Daytona Beach, Florida. While there, he reapplied to West Point and was accepted. At West Point, Nick competed on the Collegiate Parachute Team and was later named Cadet-in-Charge.

Graduating in 2006 with a B.S. in Mechanical Engineering, Nick was commissioned a Second Lieutenant. Nick branched infantry and selected the 101st Airborne for his first assignment. He was a Platoon Leader in the 2nd Battalion, 506th Infantry Regiment, 4th Brigade Combat Team, and was later promoted to First Lieutenant. Nick’s military training included Ranger, Combat Diver, Airborne, and Air Assault. Prior to being deployed to Kohst Province, Afghanistan, in March 2008, he was promoted to Company Executive Officer.

On July 20, 2008, after volunteering to go on a patrol, Nick was ambushed and killed by Taliban forces while going up a mountain pass. Awarded the Purple Heart and the Bronze Star posthumously, Nick is buried in the West Point Cemetery in West Point, New York.