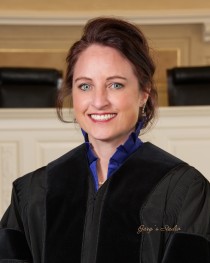 Rhonda was a contributing author to two texts on health law. She is a Judicial Educator for the National Center for State Courts, a Toll Fellow, and since 2008 she has trained all new Arkansas trial judges. She was a 6 year delegate to the Ark. Bar Association and the Legislative Liaison on Health Law to the Arkansas Legislature.

She also is Chair of the Supreme Court’s Commission on Children, Youth, and Families.  She was a founding Board Member of the Conway Interfaith Clinic; a non‐profit clinic providing care for the uninsured. She has served on the boards of many non‐profits.

Rhonda is the daughter of Ron and Sharon Sissel. She is married to Dr. Michael Wood and they have four children: Ashley (Wood) Packard, Brittney Wood, Kyle Kennedy, and Sean Wood.