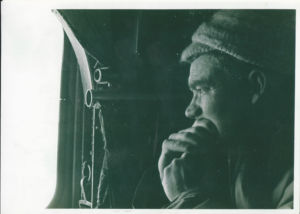 Thomas E. Berg died in a helicopter crash in 1969 as he was beginning the final year of a 10-year long
investigation of patterned-ground phenomena in Antarctica. Thomas, a 1951 graduate of Onalaska High
School served in the Navy for two years as a radar man in the Pacific area and then graduated from the
University of Wisconsin in 1957. He was expected to earn his Ph.D in geology from UW in 1971.

Thomas frequently led field parties in Antarctica to measure the growth of several hundred ice and sand
wedges as well as collecting soil samples. In 1961, he was a member of the wintering-over party at
McMurdo Station. In 1965 he joined the Research Council of Alberta. As a research officer, he
conducted investigations on the surficial deposits of the Medicine Hat area, engaged in permafrost
research in Alberta and studied the geology of the City of Edmonton. He also participated in the Steele
Glacier Expedition to the Yukon in 1967-68.

Thomas was known as an exceptional field worker with an untiring enthusiasm, perseverance, and
positive spirit under trying conditions. Berg Peak and a field station in Antarctica are both named in his
honor.