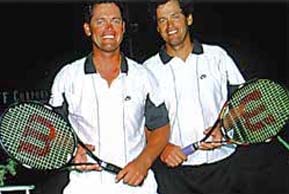 Prior to their professional tennis careers, the Gulliksons starred in basketball, baseball and tennis at OHS. Both excelled in academics and athletics, and will forever be remembered as a the “twins” from Onalaska, Wisconsin. Following their 1969 graduation, Tim and Tom played tennis at Northern Illinois University and received B.S. Degrees in Education. Professionally, Tim won 15 top-level doubles titles (ten of them with Tom as his partner) and four singles titles. He was ranked 15th in the world in singles and 6th in doubles. After retiring from the professional tour, Tim continued to play in senior tennis events, winning the Over 35 year old bracket singles title at Wimbledon in 1991. As a coach, Tim worked with several players including Pete Sampras and Martina Navratilova. In 1995, Tim was stricken with brain cancer and passed away in 1996. After Tim’s death, Tom formed the Tim and Tom Gullikson Foundation and raised over $5 million for programs helping brain tumor patients. Tom was ranked 34th in the world in singles and 9th in doubles. Shortly after he retired from professional tennis, Tom was named National Coach for the USTA Payer Development Program. He was the United States Davis Cup Captain (1994-1999) working with Pete Sampras, Andre Agassi and Jim Courier. A highlight of Tom’s career was being chosen as the 1996 U.S. Men’s Olympic Coach. It has been said that Tim and Tom have covered the world, but “are hometown kids, and never forgot where they came from!”